Depart Kampala early morning taking a panoramic drive north-west through the famous Luwero triangle Stop over at Ziwa Rhino Sanctuary which was created by the Rhino Fund Uganda for the breeding of Rhinos which will later be re-introduced into Uganda’s protected Areas. Lunch and thereafter continue to Murchison falls national park. Diner and overnight accomodation.

About Murchison Falls: Murchison Falls is well known for its wildlife viewing, sightseeing , launch cruise and hiking on the top of the falls. The river Nile through a narrow gorge flows down to a placid river whose banks are filled with hippos, crocodiles and buffaloes. An fantastic park for its variety of wildlife including the leopards, , hartebeests, Uganda Kob, giraffes and rear bird species including the rare shoe bill stock.

Early morning breakfast and game drive in the park gives an opportunity to see the big four , Buffalo, lion , Elephant and leopard. Giraffe , antelopes and a number of bird species are in abundance. Return for lunch. Afternoon take a trip up the Nile to see water animals like the Nile crocodiles, Hippos and a number of water birds. Return for Diner and overnight rest. 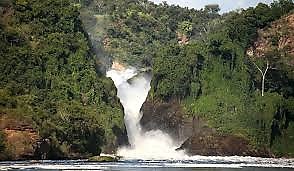